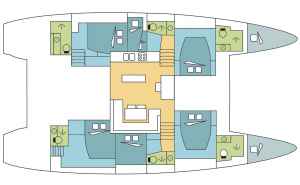 We truly enjoyed the boat and our crew. We were a little surprised when we showed up that the owner of the company said we couldn't load onto the boat until the exact minute the charter started because of "work going on on the boat" and that we would have to stay in harbor the first night (never our choice). When we went out to the dock, there was no work going on of any kind and the skipper (who was great), said we could get right on and get going. This was awkward, though we did resolve it and headed out for the night. The boat is an amazing boat - going from the 45 to the 52 is a step change a lot bigger than the 7 feet in LOA!

We spent 7 days and went many places, despite persistent mechanical problems with the boat that made us stay in harbors a couple of extra times. In general, we found the Bahamas a bit underwhelming compared to places like Greece, Thailand and the Seychelles - the distances were small between islands and the snorkeling was quite disappointing (all reefs have been fished and damaged beyond repair). On the other hand, the islands were very pretty and the shells were pretty cool and the sand was great - all things that are important!